Here we will make use of ProDy’s membrane ANM capabilities to investigate the motions of a neurotransmitter transporter in the presence of the plasma membrane. The procedure is based on the methods described in:

You will need files containing the inward- and outward-facing structures of the glutamate transporter after insertion into the plasma membrane. It is obtained from the Orientations of Proteins in Membranes database.

imANM relies on the Rotations and Translations of Blocks (RTB) method of reducing complexity within ENMs:

We start by importing necessary modules:

The imANM assumes that the membrane is normal to the z-axis, so it is important to use a structure that is properly aligned. The structure from the OPM database will work.

There will be warnings saying that ProDy wants to read beta factors, but the coordinates should be read properly. In addition to atoms, the OPM file contains points to indicate the boundaries of the membrane.

We now make two selections, one from each structure. The selections are chosen so that the final structures are homotrimers with an equal number (398) of atoms in each subunit. We also want to remove the three aspartate ligands, which are indicated as chain D in the outward-facing structure and have resid 500, in the inward-facing structure.

As a last step in preparation, we can align the structures so that we can calculate a deformation vector and compare the modes to it, as shown in the ENM Tutorial.

ProDy’s RTB method can be used for any system, whether or not a membrane is involved. imANM is an extension of RTB and they are in the same part of ProDy. The RTB method allows us to decompose the protein into pre-defined rigid blocks. Atoms within a block do not move relative to each other (hence the descriptor “rigid”), but blocks can move relative to other blocks. There are two main benefits of using blocks: First, the Hessian for a good blocking scheme is smaller than the Hessian for an all-residue representation, so the modes can be calculated more quickly. This is particularly useful when one is considering very large systems (in this case, containing thousands of residues). Second, the use of rigid blocks reduces unphysical distortions of the structure, such as stretching of backbone bonds that may result from the harmonic approximation. These benefits come at the price of accuracy. Imposing rigidity reduces the amount of dynamical detail that can be recovered from the model.

In ProDy, a rigid block is defined as a set of atoms that move together (i.e., the distances between them are fixed). Typically the constituent atoms of a rigid block are spatially adjacent (i.e., they all belong to the same domain or secondary structure element), but users are free to define blocks however they wish. The only restriction is that a block cannot contain exactly two particles. This restriction is in place because it is mathematically inconvenient to deal with two-particle blocks.

We can either define blocks within our python session, or define them externally in a separate file and write a little bit of code to handle the tasks of reading the file and assigning residues to blocks. This latter approach can be useful when exploring and comparing many different blocking schemes. We have developed one such format for a block file, examples of which can be found in 2nwl_blocks.txt and 3kbc_blocks.txt. The first ten lines of 2nwl_blocks.txt are:

The columns, separated by whitespace, are formatted as follows:

This is just one way of storing information on how the protein is deconstructed into blocks. You are welcome to use others if you have a way of reading them. We can read blocks from 2nwl_blocks.txt into the array blocks as follows:

We will do the same for the blocks of the inward-facing structure. The block definitions are based on secondary structures, which vary slightly between the structures. We therefore have two separate blocking schemes.

To use the blocks in an RTB ANM calculation, we instantiate an RTB object for each structure:

The scaling factor of 16 in this example means that the restoring force for any displacement in the x- or y-direction is 16 times greater than the force associated with a displacement in the z-direction. The constraint on motions parallel to the membrane surface implicitly incorporates the membrane’s effects into ANM. To use RTB with no membrane effects, set scale=1.0 (which is also the default value). We have here set the boundaries of the membrane to extend well beyond the protein, effectively applying the implicit membrane scaling to the entire protein.

Now we calculate the modes and write them to a pair of .nmd files for viewing. 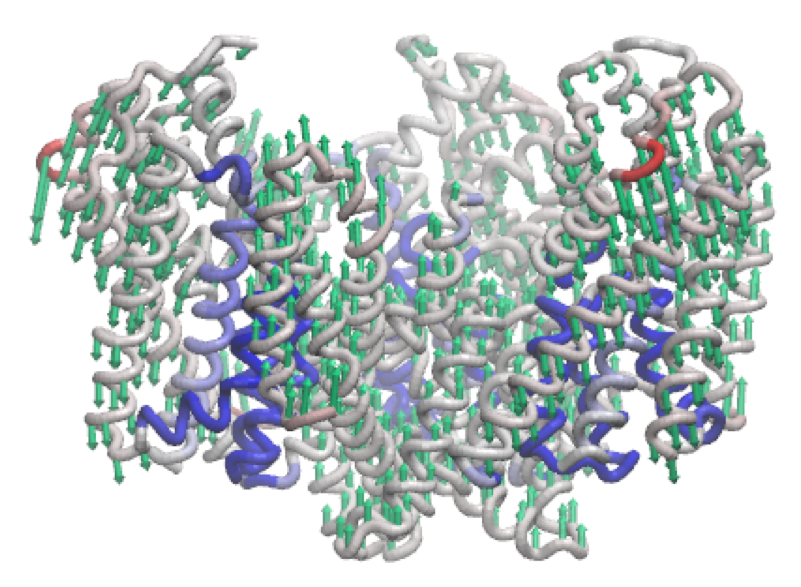 The third mode of the outward-facing structure moves all three transport domains simultaneously through the membrane in a 'lift-like' motion. 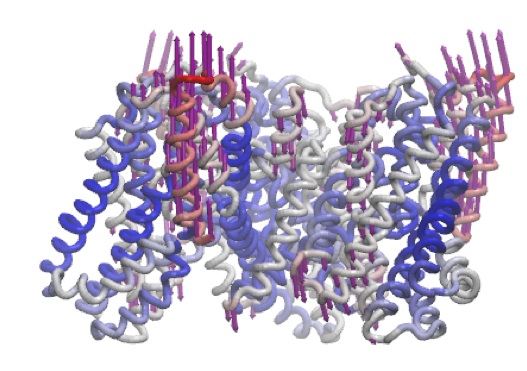 A similar motion is shown in mode 6 of the inward-facing structure.

As in the previous section, we will investigate the effect of the presence of membrane for the motion of a neurotransmitter transporter with ProDy's explicit membrane ANM (exANM) capabilities. The procedure relies on explicitly building a membrane lattice and using reduceModel().

The exANM assumes that the membrane is normal to the z-axis, so it is important to use a structure that is properly aligned. The structure from the OPM database will work.